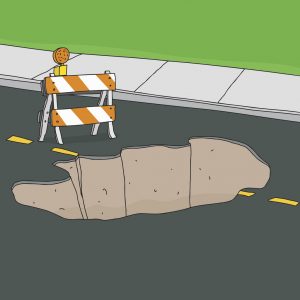 As summer comes to a close, road repair crews across the country are identifying the street repairs and potholes that must be filled before the cold weather approaches. Now is also a good time for policyholders to identify some of the “potholes” that may accompany their claims-made insurance policies and get them filled before it is too late.

As readers of Policyholder Pulse know, understanding and complying with the claim-reporting requirements of your claims-made insurance—such as cyber-risk, D&O, EPL, or E&O policies—is always an important step in avoiding a denial. So when a former employee files a complaint with the EEOC, you already know to immediately forward the complaint to your insurer and ask them to contact you to discuss arrangements for your company’s defense. The insurer usually responds with a list of its pre-approved defense counsel, informs you that it’s investigating the claim under a full reservation of rights, and asks that you forward a copy of the employee’s HR file.

Imagine your surprise when, a month later, the insurer tells you that it’s denying coverage because of an email in the file that the employee sent to HR over a year ago, complaining of some off-color comments by her boss and asking to switch to a new team. According to the insurer, this email was a “Claim” because it (1) was in writing, (2) alleged a wrongful act, and (3) sought non-monetary relief. But because this “Claim” was first made during a prior policy period and relates to the current lawsuit, it wasn’t reported in time, and there’s no coverage. In many jurisdictions, depending on the language in your policy, this may be the case even if you had continuous coverage with the same insurer the entire time.

So what steps can you take now to reduce the bumps in the road that often accompany claims-made policies’ reporting requirements?

While you’re never going to find a completely smooth road with claims-made polices, if you take some proactive steps you can at least minimize some of the bumps along the way.