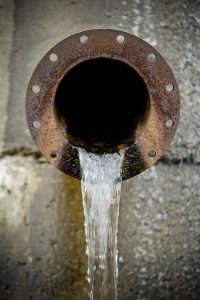 The Netherlands Insurance Company v. Butler Area School District involved a coverage claim by a school district and a few of its high-ranking officials that had been sued in a toxic tort class action that alleged elementary school students had consumed high levels of lead and copper through the school’s water system. The class action complaint alleged that the school district did not properly operate a chlorinator in the water system, resulting in excessive concentrations of chlorine that accelerated the corrosion of the water pipes. The corroding pipes allegedly leached lead and copper into the drinking water.

The insurers’ denial was wrong, the court held. Citing Pennsylvania precedent, the court reasoned that the standard pollution exclusion “does not apply to a substance such as lead that is a component of a product that degrades over time rendering the substance incrementally bioavailable.” That’s what happened with the school’s water system. The court also reasoned that it could not, at the preliminary stage in the case, determine whether there had been a “discharge, dispersal, seepage, migration, release or escape of ‘pollutants,’” and held that the exclusion is ambiguous. As for the lead exclusion, the court construed it narrowly in favor of coverage, holding that it excluded only injury proximately caused by lead. Since the class action alleged potential separate and distinct injuries from copper, the insurers could not avoid their duty to defend by virtue of the lead exclusion.

The court noted that it was rejecting the insurers’ “invitation to turn Pennsylvania law relative to the duty to defend on its head.” The court reiterated that the duty to defend is broad, the duty is triggered by any potential for coverage, and an insurer is required to defend the entire suit as long as one claim is potentially covered.

It is not uncommon for policyholders to face circumstances that seem like they might fall within the scope of the pollution exclusion, given the exclusion’s broad language. But more than 30 years of insurance case law have taught us that the exclusion is open to interpretation and excludes much less than some (insurers, certainly) may think. First there was the “sudden and accidental” pollution exclusion, and many courts rejected the insurers’ argument that the exclusion barred all gradual pollution. Then there was the “absolute” pollution exclusion, and many courts held that it, too, does not exclude as much as insurers have claimed, including that it is limited to situations involving “traditional” environmental pollution, and the term “pollutants”—which insurers have interpreted to include just about everything—is limited as well. Butler Area School District joins a long line of cases in which courts have beaten back this oft-called defense from the insurer playbook. Policyholders facing a coverage denial on the basis of a pollution exclusion should not simply take “no” for an answer, but rather should think creatively about arguments around the exclusion.

More generally, Butler Area School District is a reminder that the duty to defend is broad, and requires a full defense if there is a potential that any claim or allegation in the underlying suit is covered. Critical thinking and an understanding of insurance law often can be the difference between coverage and a substantial uninsured loss.