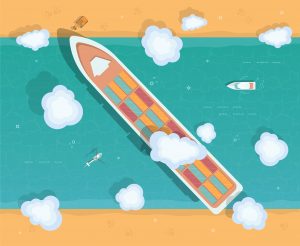 A few weeks have passed since the Suez Canal was cleared of the now infamous Ever Given, the quarter-mile-long, 220,000-ton cargo ship that ran aground, clogging one of the world’s most crucial shipping arteries for over six days. For almost a week, the world was captivated by an 869-foot-wide portion of the historic canal built in 1869 to connect the Mediterranean Sea to the Red Sea through the Isthmus of Suez. Ordinary people from all walks of life instantly became armchair marine engineers, nautical scientists and tugboat captains, offering advice on how to free the ship in a matter of minutes, while hundreds of massive cargo vessels sat stranded at either end of the canal. Finally, on March 29, 2021, after around-the-clock efforts by international teams, salvage crews extricated the ship, allowing the rest of us to turn (reluctantly) back to our day jobs.

But the Ever Given’s story is not over. It has only just begun.

The fallout from the Ever Given’s blockage of the Suez Canal will take years—maybe even decades—to sort out. The New York Times estimates that the stalled ship held up as much as $10 billion in cargo a day from moving through the canal, including items like cars, oil, livestock, agricultural goods, laptops, sneakers, electronics and toilet paper. Manufacturers, cargo companies and retailers will have to determine who can be held financially responsible for losses caused by delayed shipments. Agricultural producers will seek to recoup revenue lost due to produce that went bad while sitting on ships anchored on either side of the Ever Given, waiting to move through the canal.  In the end, someone will have to pay for those losses.

Insurance companies will also play a big part in this story. That is because many savvy companies may have prudently insured against such unpredictable losses, and those that did will be submitting claims for coverage. There are at least three types of insurance products that can offer protection against losses like those caused by the Ever Given’s plight: (1) marine cargo insurance, (2) contingent business interruption (CBI) insurance and (3) supply chain risk insurance. Those involved with the transportation of goods on ships like the Ever Given—whether manufacturers, carriers or recipients of such goods—should be aware of these insurance offerings. If not already part of their insurance program, they should be seriously considered.

Marine cargo insurance is one of the oldest forms of insurance in the world. It is a unique product that typically covers the owner of goods in transit against physical loss or damage. Unlike many insurance products, coverage offered by marine cargo insurance is generally not time-constrained. Rather, the cargo is insured for whatever period is required to deliver the covered items to their final destination. Incidental delay—like that caused by a massive cargo ship getting stuck in the Suez Canal for a week—usually does not impede coverage. While many marine cargo policies expressly exclude losses caused by delay, some policies add coverage extensions for such losses, and others also cover the cost of “demurrage” (additional fees owed to the shipping company) if applicable. In addition, for policyholders who suffered losses because shipments had to be rerouted to avoid the blockage in the canal, coverage may exist for losses caused by the detour and delay, including forwarding and warehousing expenses.

For businesses that suffer interruption of operations due to a disruption in shipping, CBI coverage may respond. CBI coverage can be provided as part of all-risk first-party property policies, or separately in discrete policies or endorsements. Generally, CBI is understood as loss an insured suffers when an event prevents a supplier from providing goods or services essential to the continuity of the insured’s business. Like marine cargo insurance, many CBI policies require “direct physical loss or damage” to covered goods or property for coverage to apply.

While marine cargo and CBI insurance policies should likely be included as part of a comprehensive insurance program for companies dependent on goods or supplies shipped across the world’s waterways, such policies will not necessarily cover all the losses stemming from the Ever Given’s blockage of the Suez Canal. That is because many of these policies require “physical loss or damage” to covered goods or property to trigger coverage. This requirement is met where perishable goods were spoiled due to delay in getting through the canal, provided there is no applicable exclusion. However, non-perishable goods like cars, laptops and sneakers were likely not physically damaged. In this case, coverage for delay may respond, when it has been purchased.

For the owners of the Ever Given and those who may face liability claims because of its grounding, commercial liability insurance may also come into play. The canal authority may sue for loss of toll revenue, and both transit companies and shippers could pursue claims because of their losses. Generally, commercial liability insurance requires allegations of bodily injury or property damage to activate the insurer’s duty to defend or indemnify for a loss. But importantly, many modern commercial liability policies define property damage to include the loss of use of tangible property—a definition that could include the loss of use of vessels, shipped goods or supplies, and perhaps even the canal itself. Ship owners and operators may also maintain cargo liability coverage that could apply to such claims.

The Suez Canal is finally free of the Ever Given, but the now notorious ship offers a stark reminder to policyholders. It is an important to remain vigilant and constantly reevaluate your insurance program to ensure you and your company are protected against exposure to unforeseen risks like those highlighted by the canal’s blockage.