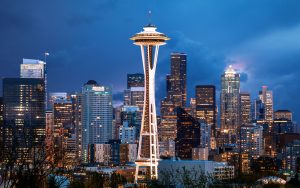 Like so many other businesses in the past year, Space Needle sustained losses related to the pandemic, leading it to submit to North American Elite a business interruption claim for the “millions of dollars in lost revenues [it sustained] in connection with the Covid-19 pandemic and government orders issued after its outbreak.”

North American Elite reserved its rights under the policy and brought a declaratory judgment action in New York state court, asking the court to declare that the policy did not provide coverage. A week later, Space Needle sued North American Elite in the United States District Court for the Western District of Washington and argued that Washington law applied to the dispute and that it could litigate in Washington, notwithstanding the Governing Law and Jurisdiction provision.

Recognizing that insurance is an industry regulated by the states, the New York court took note of a Washington statute, dating back to 1947, that prohibits any insurance policy issued in the state from “requiring it be construed according to the laws of any other state” or “depriving the courts of [Washington] of the jurisdiction of action against the insurer.” By seeking permission to sell insurance in Washington, North American Elite agreed to abide by Washington law, including this statute prohibiting forum-selection clauses in policies and depriving Washington courts of jurisdiction. The forum-selection clause in the Space Needle policy, therefore, violated Washington law, and the New York court declined to enjoin Space Needle from continuing its Washington lawsuit.

The court reached this conclusion even though it found that New York is a freedom-of-contract state, forum-selection clauses are prima facie valid, the parties are “sophisticated,” and the policy language is unambiguous. But none of these considerations permitted North American Elite to sidestep the requirements of Washington state law, applicable to the policy at the time it was issued in Washington.

This decision may have major implications for Space Needle. As North American Elite argued in the New York action, if the case proceeds in Washington, Space Needle can claim that it is entitled to punitive and bad faith damages—damages that might be more difficult to obtain in New York. But the decision also has important lessons for policyholders everywhere: