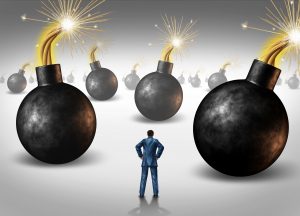 Insurance policies are legal documents. In the event of a dispute, their scope and meaning will be submitted to a court or arbitrator for interpretation. Most brokers are not attorneys. Most risk managers are not attorneys. And few companies seek counsel to review policies before a claim arises. But underwriters, assisted by their counsel, increasingly are including litigation-focused provisions in their policies. Although these provisions often appear innocuous to readers unfamiliar with insurance litigation issues, they are like time bombs designed to explode in the event of a contested, litigated claim.

To illustrate, the legal doctrine of contra proferentem is a near-universal rule that seeks to balance the scales when a dispute arises between the insurer who drafted an insurance policy and the policyholder that purchased it. If the court finds a provision in the policy ambiguous—i.e., fairly and reasonably susceptible to more than one construction—then the court will construe the ambiguity against the insurer-drafter and in favor of the policyholder. As would be expected, insurers do not like this rule of construction. Insurers have tried to chip away at this rule in the courts by arguing, for example, that it should not apply to “sophisticated” policyholders. Fortunately for policyholders, such efforts have been largely unsuccessful.

So insurers have turned to defeating the principle by having the contract state that it will not apply. For example, a recent policy states as follows:

Where the language of this Policy is deemed to be ambiguous or otherwise unclear, the issue shall be resolved in a manner most consistent with the relevant terms of the policy without regard to authorship of the language and without any presumption or arbitrary interpretation or construction in favor of either the Insured or the Company.

This wording is buried in a dispute resolution provision. The provision only comes into play when there is a dispute about the policy that requires a contested proceeding. Risk managers must exercise vigilance to avoid finding themselves in a position where they unknowingly agree to such wording, which in some cases can mean the difference between a finding of coverage or no coverage.

Policies may contain other, similarly vexing litigation “time bomb” provisions that emerge long after the policy is issued and only when there is a dispute, including:

The foregoing items represent a nonexclusive list of the sorts of litigation “time bombs” buried in your policies that may damage any future insurance claim if there is a dispute. Constant vigilance is a risk manager’s only protection. It is a good practice to review every policy form before purchase, if possible, and best practice to involve experienced in-house or outside coverage counsel when you have a question or concern. Buyer beware.

Check Under the Hood: Optimize Your Insurance Coverage with an Attorney Review of Your Policies before Renewal

Paving Over Potholes in Claims-Made Policies