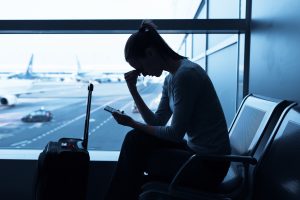 Amazon. Bank of America. Citigroup. Dick’s Sporting Goods. JP Morgan. Kroger. Meta. Microsoft. Procter & Gamble. Target. Walt Disney Company. These are just a few of what is a growing list of companies that have offered to cover costs for employees who may now need to travel out of state to receive abortion care in light of the Supreme Court’s decision in Dobbs v. Jackson Women’s Health Organization. But companies that are stepping up to further protect their employees’ reproductive rights are choosing to do so in the face of potential public backlash and uncertain legal risks.

Just days after Citigroup announced it would be providing such travel benefits, a Texas State Representative announced that he would be introducing a bill to bar the bank from underwriting Texas municipal bonds unless it rescinded its new employee benefit. America First Legal—the conservative organization founded by former senior Trump advisor Stephen Miller—recently demanded that the EEOC open a civil rights investigation into a company providing such benefits, claiming it was discriminating against employees who choose to carry their pregnancy to term. Texas legislators also have contended—through “cease-and-desist” letters sent to Lyft and others—that financing abortion travel constitutes a breach of a company’s fiduciary duties to its shareholders. And a group of Texas lawmakers have threatened firms that choose to offer such benefits with potential criminal liability under existing Texas laws and plan to introduce new legislation that would impose additional civil and criminal sanctions on Texas employers offering such benefits.

Some of these threats are almost certain to result in litigation. And although Justice Kavanaugh wrote in a concurring opinion in Dobbs that attempts to ban women from traveling to another state where abortions are legal would violate the constitutional right to interstate travel, it is far from clear to what extent states can prevent employers from facilitating such travel. Until the courts provide clarity on the subject, companies that want to ensure their employees have equal access to reproductive health benefits—no matter where in the U.S. they reside—should consider how best to minimize the legal risks involved in offering such benefits.

Travel Reimbursement as a Group Health Benefit
Most employers will want to offer travel reimbursement as part of its existing group health insurance plan to take advantage of protections afforded by ERISA. ERISA preempts state laws that interfere with the administration of an ERISA-covered employee benefits and would likely provide a strong defense against states’ attempts to prohibit travel benefits for abortion services. Using an existing group health plan also has the benefit of administrative convenience, as employers can use existing processes and procedures that are designed to comply with other applicable laws and regulations (such as HIPAA, COBRA or the ACA).

However, it’s unclear whether ERISA’s pre-emption protections would protect against state laws that attempt to impose criminal liability on employers for assisting their employees in obtaining an out-of-state abortion.

Using an existing group health plan may also not be feasible for employers that do not have a self-insured plan but instead rely solely upon a health insurance company to provide such benefits. Using an existing group health plan will also limit benefit availability only to those employees and their dependents that elect to enroll in the company’s plan.

Scope and Amount of Benefits
Employers will also have to consider the scope and amount of benefits offered. Most employers may want to consider offering coverage for travel required to obtain any medical treatment (including mental health or addiction) that is not available near an employee’s home. Expanding the benefit beyond just abortions will help ensure compliance with the Mental Health Parity and Addiction Equity Act, which requires health plans to cover mental health and substance abuse services as generously as medical and surgical services and reduce the risk of discrimination claims by employees who would not otherwise take advantage of abortion-only benefits.

Although employers can reimburse travel associated with qualified medical care (including abortions) on a tax-free basis, the IRS caps such reimbursement at only $50 of lodging per night or auto mileage at IRS-approved rates. Employers that want to offer more generous benefits will have to report it as taxable income to its employees. In addition, for employers that use high-deductible health plans, travel reimbursement benefits can only be provided after the plan’s deductible has been satisfied.

Employee Privacy Concerns
Employers and employees alike will likely have privacy concerns over abortion-related health insurance benefits. Although existing laws and regulations—such as the ADA and the HIPAA privacy rule—regulate the confidentiality of employee medical information, protections may not apply to law enforcement demands or subpoenas from state prosecutors investigating employees who may have obtained an abortion. Employers will want to consider ways in which they can minimize the amount of information they need to obtain from plan beneficiaries or receive from third-party plan administrators when providing such benefits.

Interstate Considerations
One striking aspect of the threats made against companies choosing to provide abortion-related health benefits is their nationwide scope. For example, Texas legislators have threatened to treat the provision of abortion benefits as a per se breach of a company’s fiduciary duties to its shareholders, removing the protections provided to directors and officers under the business-judgment rule, for any publicly traded corporation that has shareholders residing in Texas. For many companies, these arguments will stand in tension with the “internal affairs doctrine”—applied in most states, including Texas—which mandates that a corporation’s internal affairs are governed by the laws of the entity’s state of incorporation. Moreover, the Supreme Court has previously held that state laws purporting to regulate the internal affairs of non-resident corporations may be unconstitutional under the Commerce Clause. But it remains to be seen how well these doctrines will hold in the face of concerted efforts to restrict the conduct of all companies that do business with a given state, regardless of their state of incorporation, as well as efforts to elevate ordinary corporate-governance questions into criminal acts.

Using Insurance to Mitigate Legal Risks
Regardless of how carefully a company structures its approach to providing reproductive health benefits, it may be forced to defend its decisions in court. Companies targeted for offering such politically polarizing benefits in alleged violation of state law may be able to turn to their existing insurance coverage to defend against such claims or suits.

Even if the States do not follow through, their threats to-date could give rise to other potential claims—such as shareholder securities lawsuits—that would also trigger D&O coverage. Companies that have received threats of legal action because of their decision to offer travel benefits for out-of-state employee medical care should therefore consider giving notice of circumstances under their existing D&O, Fiduciary, and/or Employment practices liability insurance policies, as such threats may reasonably be expected to give rise to future claims.

In this uncertain legal landscape, carriers may attempt to assert that coverage is barred for a variety of reasons, such as exclusions for criminal, intentional, or knowing violations of the law or for bodily injury claims. But none of these exclusions should preclude coverage. Mere allegations of criminal misconduct are not generally enough to relieve an insurer from its obligation to pay defense costs. And bodily injury exclusions typically only exclude claims “for” bodily injury, and the lawsuits proposed by state officials are for alleged violations of state law, not for bodily injury—regardless of any purported harm asserted. Insurers may also try to bootstrap their substantive arguments by bringing declaratory judgment actions in venues they deem hostile to abortion rights, triggering complex choice-of-law and choice-of-venue disputes. Before providing notice, companies should retain experienced coverage counsel to ensure that their claims are presented in a way that will maximize potential coverage.